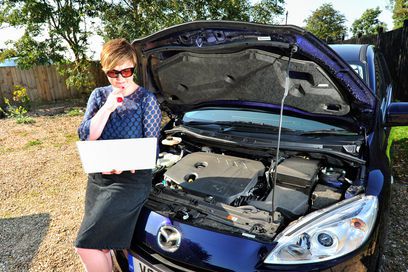 I know virtually nothing about mechanical engineering. So when my Mazda 5 broke down recently, I panicked and reverted to the classic cure-all loved by IT experts across the globe. I switched it off and on again. If that doesn’t work, I thought, I’ll call a man, and crack open a KitKat.

To my amazement, though, it did! One minute the car was slowing to a complete, disconcerting stop, and the next I was trundling back up the road, delighted to have diverted disaster, somehow.

I assumed it was a fluke. But a trip a week later to my local garage, Milcars Mazda of Watford, not only revealed no outstanding faults, but I was told, astonishingly, that I’d fixed the problem.

With so much electrical gadgetry controlling your car these days, it’s effectively a computer on wheels. So it makes sense that rebooting its hard drive – by turning off the ignition – has a similar effect to restarting your laptop.

A diagnostic check carried out at the dealership did reveal a previous problem with the Electronic Stability Control (ESC), which was still stored in the car’s memory. But my restart cleared that, and allowed the 5 to carry on as though nothing had happened.

If it happens a few times, the engine management light will come on, the technician informed me, having also taken the time to explain how the ESC worked, and why it might have resulted in my Mazda’s momentary breakdown.

But what he couldn’t do was restore my dented faith in the MPV. I had been noticing an occasional loss of power on short journeys, where I would frustratingly find the accelerator momentarily ineffective.

And while it has only ground to a halt once, I just don’t have the same confidence in its ability to get me from A to B. Rightly or wrongly, it feels like the beginning of the end. This is totally unfair, of course.

The 5 has been very well behaved in all other respects. It’s as practical as a pair of wellies, too. Trips to the tip, family jaunts and even a girls’ night out have converted it from car to pick-up truck and minibus on many occasions, without much fuss.

And I still get compliments from complete strangers on the electric sliding doors, as if they are the most futuristic feature anyone has ever seen sported on a road car.

So I remind myself that all a car buyer can really expect is not for their vehicle to be perfect for the duration of its life, but for the dealer to handle problems that do arise quickly and efficiently, and where appropriate, at no extra cost. And in that respect, the Mazda could not be faulted.