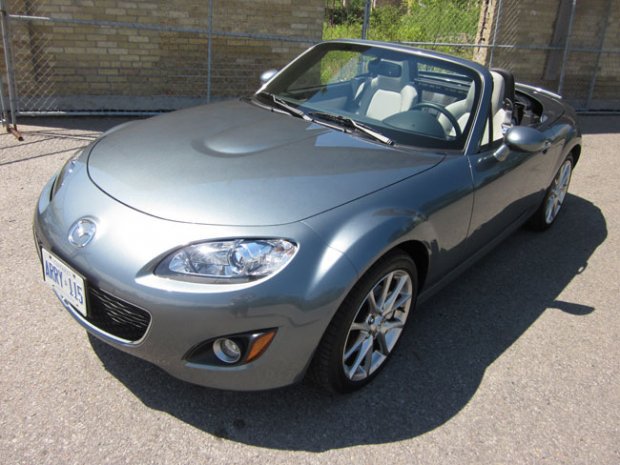 Whenever I tell people that if I could go out right now and buy a toy car for myself, I’d come home with an MX-5, they always say, ‘Not an S2000? Not an SLK? Not a Z4? Not a Boxster?’ No, no, no and … well, maybe. Love is not about the specs. It’s not about being the fastest or most expensive or having the most torque. It’s about having everything in just the right proportions. It’s about eliciting emotion. It’s about how you see yourself when you’re behind the wheel, whether the rest of the world sees it or not.

For me, the 2011 Mazda MX-5 offers the same unbeatable combination of right fit, great handling, satisfying acceleration, throaty rrrrawr! and je ne sais quoi that made me fall in love with it years ago. And my feelings have never wavered.

Mazda released only 750 of this Special Edition tester I’m driving, shortly after celebrating the production of its 900,000th MX-5 (which I and many others still call Miata). It comes with a retractable hardtop, unique grey leather interior with grey top stitching, otherwise-optional Premium and Suspension packages and 17-inch alloy wheels. It also has jinba ittai embroidered into the floor mats, reminding you – as if you needed it – that the rider and these 167 horses are one.

The hardtop may make things a little claustrophobic for taller folk but, at 5-foot-4, I was never crammed for space. It’s a no-fuss, 12-second operation to get it down. It takes just the flick of a latch and the push of a button, and dropping the top actually leaves a respectable amount of trunk space (for a roadster) intact. I went to Walmart in it one day and loaded up on dog food, diapers, the assorted accoutrement of suburban life and, then, in a fit of organizational aspiration, threw two big, disassembled plastic shelving units into my cart. It wasn’t until I got to the cashier and she said, ”Hope you’ve got a big car” that I remembered it wasn’t my trusty minivan parked in the lot. I got everything into the trunk but the shelving units, which I propped up in the passenger seat. Likely not quite legal, but I was only four right turns from home. The MX-5 is surprisingly functional for an indulgent wee two-seater. (Even though it’s legal, I never did put my two-year-old in it. I suppose I wouldn’t have a problem toodling around town at low speeds with him, but the thought of taking him on the highway, where debris might hit him, tires have been known to fly off semis and Mommy is just too big a wuss to chance it – no. )

The hardtop is barely taller than the ragtop, and it adds less than 40 kilograms to the car’s weight, so even the purists can’t complain too much. As it is, it makes the car a year-round option while eliminating the security concerns that are inherent in a convertible.

There are a couple of design peccadilloes that could take a little massaging, such as the placement of the cup holders behind the shifter, so that taller drinks get in the way of changing gears, but, for the most part, everything falls easily to hand.

The real joy in driving the MX-5 comes from the combination of the short-throw six-speed shifter, deceptively good torque (although rated at just 140 pound-feet at 5,000 rpm, it seems to hit its stride much earlier) and easily manipulated pedals. It may not be the fastest roadster on the block, but for getting very quickly up to speed from a stop light, there’s a lot of joy to be had. It makes the loveliest noises while doing so, too. The near-50/50 weight distribution that makes it so popular on the track is evident in its neutral handling, plus there’s excellent road feedback without anything getting overly rough.

The MX-5 remains a beautiful study in simplicity. There’s an engine in front, drive wheels at the back, two seats in between and everything is kept as light as possible. It’s a bit wider than the previous- generation model for better stability. The interior is clean with nothing overwrought. The roof works seamlessly. It has just enough modern amenities to go beyond the track in comfort without being over-engineered. Trunk space is actually usable.

With more than 20 years’ history and approaching a million sales, it’s no wonder the MX-5 is the world’s most popular sports car.