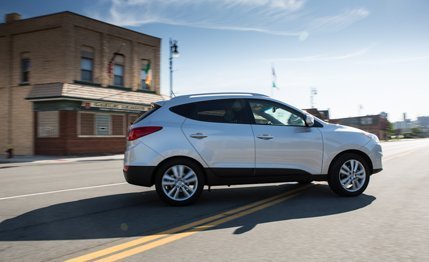 At $29,165, our Mazda CX-5 was the least expensive vehicle in our trio — but it lacked four-wheel drive and produced the least horsepower. While we’re on the subject of frugality, it also boasts the best EPA fuel economy ratings, and in our rigorous testing (we drove like animals) used by far the least fuel. In fact, it beat the Ford by 30 percent and the Honda by fifteen.

If the defining feature of the CR-V is usability and the Ford’s is high-tech, the Mazda CX-5’s calling card is gimmick-free elegance. There’s a richness to the vehicle that goes beyond the others — in its exterior styling as well as its cabin. The red-stitched black leather looks and smells more expensive than the hides in the other cars; the no-frills dashboard trades overwrought styling features for simple functionality, and the Mazda’s driving dynamics are, simply put, a whole class ahead of its rivals.

The CX-5’s steering feels like its rack came straight off the shelf of the Porsche engineering center. It’s accurate, well-weighted, and highly communicative. Will Goldilocks care about steering? Does a bear cook in the woods? Absolutely! The typical crossover buyer may not speak in terms of on-center steering feel and load buildup, but all drivers know good steering when they feel it: Goldilocks will get in this car and instantly feel like she’s connected with the wheels and in control of her vehicle.

And when the bears come running after her, the CX-5 will make the quickest getaway. It may be down 85 hp from the Ford and 30 hp on the Honda, but the Mazda’s body weighs some 300 lb less than the Ford and about 100 lb less than the Honda when comparably equipped. With short, closely spaced gearing and a transmission that loves to play ball, the Mazda doesn’t suffer much from its lack of power — and the well-weighted leather shift knob can be thrown into a fully manual gate that uses the racing layout (forward for downshifts, rearward for upshifts). 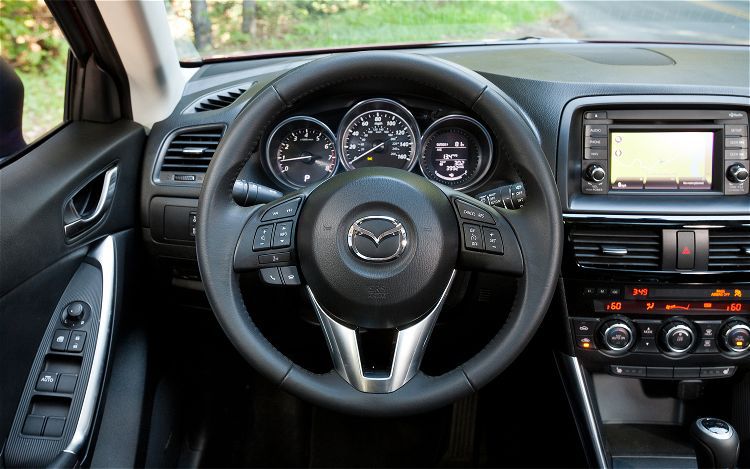 The CX-5 leisurely rounds bends at speeds that would have the CR-V’s tires screaming loud enough to scare off any attacking furry mammal, and it demonstrates class-leading body control over potholes, frost heaves, and speed humps. The front suspension will bottom out over big bumps that the Ford takes in stride, but the rest of the Mazda’s driving experience is flawless. And its ride is quieter and more supple than the others’.

In terms of usability and technology, the CX-5 again falls right in the sweet spot. Its cargo room is the smallest of the bunch, but its cabin is biggest overall, meaning it has the most space for people. The rear seat is split 40/20/40, and it can be folded forward in any combination by way of very clever handles near the rear hatch. The resulting load floor isn’t, however, perfectly flat.

The CX-5 features some of the Ford’s high-tech goodies without feeling overly gimmicky. Like the Escape, our Mazda was equipped with blind-spot monitoring — which isn’t available on the Honda, which needs it the most thanks to thick D-pillars that obscure rearward visibility. All three cars had reverse cameras, though the Mazda’s screen is quite small. The CX-5’s optional swiveling HID headlamps make for great visibility on curvy roads at night, and we suspect its Bose stereo is good enough to keep passengers entertained on long journeys over the hills and through the woods — whether to Grandmother’s house or to a rave.

Getting lost shouldn’t be a problem since Mazda’s navigation system was designed by TomTom, and while the screen is by far the smallest of the three, its graphical buttons are the largest and easiest to operate. The steering wheel controls and gauges are simple, straightforward, and highly legible — and like the other cars, the CX-5’s dual-zone climate control is easy to use, and it spit out the coldest air-conditioned air of the group.

The interesting thing about children’s stories is how well they apply to our adult lives. Sure, you can have your porridge any way you like it. The Honda CR-V is like oatmeal — not very flavorful, but packed with benefits. The Ford Escape is a warm bowl of peppered grits packed with lots of spice and flavor — though perhaps too much for some. And then the Mazda CX-5 is a delicate polenta — it’s the same basic idea, but somehow this porridge comes across as more substantial, more expensive, and more elegant. Or as Goldilocks might say, it’s just right.