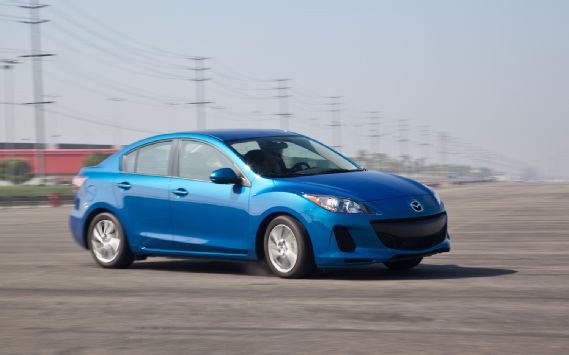 Some car makers will meet the average by including dedicated high-mileage cars in their fleets, trading performance for fuel efficiency. Or they will build hybrids or electric vehicles (EV). In addition to being rather pokey from a performance standpoint, the former usually just aren’t that cool. The latter are tremendously expensive to design and build and, with the exception of the Toyota Prius, sell in very light numbers.

Where does that leave those of us who want a fun car that gets 40 mpg on the highway and costs less than $30,000?

It leaves us with Mazda, one of the small Japanese automakers. In the short term (through 2016), Mazda, known as the ”Zoom Zoom” company, has neither the resources nor the inclination to build a hybrid or EV. Instead, the company will meet CAFE standards by refining existing technologies. That’s where Skyactiv comes in.

”Skyactiv” is a group of significant engineering enhancements to engines, transmissions, body, and chassis. The term derives from the fact that Mazda’s engineers were told that the ”sky’s the limit” for ideas to improve existing technology. The refreshed 2012 Mazda 3 will be the first of the company’s models to incorporate these upgrades.

The Skyactiv Mazda 3 (available as a sedan or hatchback) gets a 155 horsepower 2.0 liter four cylinder, which is about 15 percent more fuel/emissions efficient and more powerful than Mazda’s current MZR 2.0 liter. Mazda achieved the gains by raising engine compression to a sky-high 14:1, although the Skyactiv 3 will run with 12:1 compression on America’s lower-octane fuel. A new piston design inside smaller bores with a longer stroke combines with a new multi-spray fuel injection strategy and significant reduction in engine friction and other losses to make the compression, fuel efficiency, and emissions improvements possible.

The result is 28 city/40 highway mpg for the automatic-equipped sedan and 27/39 mpg for the manual (hatchback numbers are 28/39 and 27/38). Mazda achieves those impressive numbers with a car that won’t bore you stiff.

We drove the Skyactiv Mazda 3 through the high desert canyons outside Los Angeles. The first thing you notice before stepping in is the 3’s new front fascia, which tones down the previous car’s lunatic smiley face. New aluminum alloy wheel designs complement the car’s profile, and there are new colors including of course, ”Sky Blue.”

Take a seat and everything looks largely the same except for the information display, which now sports white lettering. Skyactiv models get–wait for it–blue instrument gauge illumination. Other Mazda 3 models like the S and Mazdaspeed 3 get gray or red gauges. Chrome trim on the HVAC and stereo/nav switchgear makes finding the right knob easier, while accenting the dash.

My first stint was in a four-door, manual transmission-equipped Mazda 3. On twisting, it was obvious that the Skyactiv 2.0 liter offers more squirt than the current MZR 2.0. There’s better mid-range acceleration in second through fourth gear. And though the four-cylinder’s torque (148 lb-ft.) won’t make you giddy, the punch is noticeably improved and betters that found in high-mileage competitors like Toyota’s Corolla, Honda’s Civic HF, and Ford’s Focus SFE.

Maximizing the torque is fun thanks to the improved six-speed manual, which has the kind of action found most often in sports cars. If you want to heel-toe the Skyactiv 3 like a sports car, you’ll have to boot the throttle aggressively between shifts, owing to its emissions-biased programming. But you can throw this 40 mpg econo-runner into corners like a sports car. Four wheel drifts come easily, and the steering and overall balance is enthusiast appropriate.

An automatic-equipped five-door hatch was my ride back to L.A., and its functionality and look add to the sport. The six-speed automatic shifts quickly and efficiently, cleverly combining a traditional torque converter and a clutch. The auto-manual function rev-matches downshifts with aplomb and is ergonomically right.

Bottom-line: Achieving wallet-pleasing fuel efficiency with conventional technology is impressive. Maintaining the fun in the bargain is really impressive. The Skyactiv Mazda 3 manages both, proving you can have fun at 40.