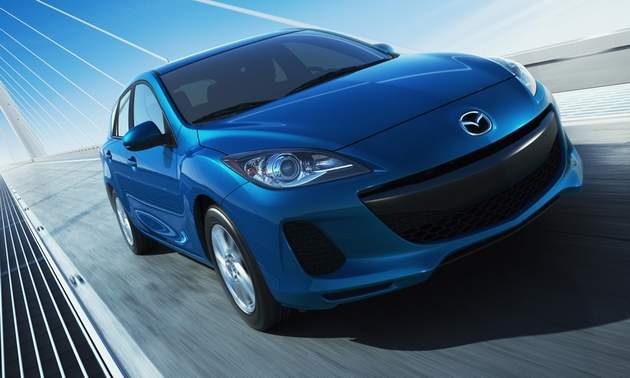 What is it?
Three months ago, we got to drive some riveted-together Mazda 6 mules with SkyActiv gasoline and diesel technologies beneath the hood. Those showed promise even in the larger, heavier Mazda 6 bodies. Now we’ve had a chance to drive a production Mazda 3 with a SkyActiv gasoline engine on a fun mountain road and came away even more impressed.

SkyActiv is Mazda’s new approach to automotive efficiency. The heart of the Mazda 3s we drove was their new high-compression SkyActiv gasoline direct-injection fours. Using direct injection, reduced back pressure and a number of other technologies, Mazda engineered this system to operate at a compression ratio of 14:1. That’s unheard of in a mass-produced compact car. Even the Ferrari 458 Italia has only a 12.5:1 compression ratio. However, U.S.-spec Mazda 3s with SkyActiv will get only a 12:1 compression ratio because of two factors:
1. There’s no room in the current Mazda 3 body to fit the requisite longer exhaust headers.
2. We Americans insist on using regular gasoline in everything, all the time.

Nonetheless, even at 12:1, the 2.0-liter four goes from 148 peak hp to 155, while torque increases 10 percent to a 148-lb-ft peak and goes up 15 percent in mid- and low ranges. Fuel economy goes up by 21 percent to 28 mpg city/40 mpg highway with the six-speed automatic. Both six-speed manual and six-speed automatic transmissions are thoroughly revamped for more efficiency, too.

What’s it like to drive?
The Mazda 3 starts out as one of the most fun-to-drive cars in the compact class, and this one adds more power and quicker shifting to that equation. Power and torque bands are wide and flat, with power available almost all across the tach. The 155-hp peak comes at 6,000 rpm, but there’s plenty of torque below that.

The fact that you can get a six-speed manual in this huge seller should garner some kind of medal for Mazda. The fact that the six-speed was reengineered with shorter throws and reduced friction just makes it all the better. It’s almost Miata-like. The six-speed automatic is quick, too, with none of the low-speed slogging that accompanies DSGs from Volkswagen and others. A soul-sucking CVT was never considered. The Mazda 3s we drove remained nicely balanced in the many corners into which we flung them; the 3 is truly one of the leaders in this class for driving glee. Steering feel from the electrohydraulic system (an electric motor powers the hydraulic pump) was direct and relatively tight, another much-appreciated feature.

Ride may seem a bit stiff for those seeking Toyota Corolla-like brain balm but felt entirely livable for everyday driving.

Do I want one?
There are seven engine and transmission pairings available with SkyActiv drivetrains (no diesel yet) in both sedan and hatchback body styles. There are even more powertrain combinations outside the Skyactiv line.

The base Mazda 3 with the old 2.0-liter MZR four, which does not have SkyActiv, can be had for just $15,995. SkyActiv comes with enough standard features to increase the price to $19,245. Above that in horsepower but without SkyActiv, the 2.5-liter V6 is still available, and at the top of the heap is the all-conquering Mazdaspeed 3 for around $24,000. So there are a lot of Mazda 3s out there. The SkyActiv technology will almost certainly be adopted by other carmakers as a way to meet ever-increasing fuel-economy standards. Mazda is to be congratulated for bumping mileage up and still making cars that are fun to drive.