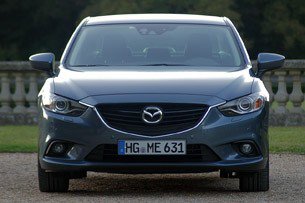 The 2014 Mazda6 starts at $20,880 – *excluding a $795 destination fee – and will offer buyers up to 37 mpg highway in base form. That money will fetch buyers a 2.5-liter four-cylinder paired to a six-speed manual – a setup packing 184 horsepower and 185 pound-feet of torque. The Skyactiv powertrain is good, Mazda says, for 25 miles per gallon in the city and 37 mpg on the highway. Stepping up to the six-speed automatic gearbox will yield an additional 1 mpg in city and highway driving for up to 38 mpg highway. Despite offering more equipment, the base 2014 model carries a modest $155 price increase over its 2013 predecessor.

Available trims include i Sport starting at $22,495 and i Touring at $24,495 (*both excluding destination charges). The latter swaps the standard car’s 17-inch wheels for 19-inch rollers and includes dual-zone automatic climate control and leatherette sport seats among other niceties. Buyers can snap up a tech package that includes TomTom navigation and an 11-speaker Bose Centerpoint sound system for $2,000. Keyless entry, rain-sensing wipers and the company’s Smart City Brake Support are all part of that kit as well. Check out the full press release below for more information, and look for more details on the diesel-powered 2014 Mazda6 as we get closer to that vehicle’s launch.

On sale now, the 2014 Mazda6 is fitted with a SKYACTIV-G 2.5-liter gasoline engine, which can be paired with a choice of transmissions: the SKYACTIV-MT six-speed manual transmission or SKYACTIV-Drive six-speed automatic. Touting 184 horsepower at 5,700 rpm and 185 lb-ft of torque at 3,250 rpm, the sleek sedan offers impressive fuel efficiency at 25 city/37 highway/29 combined MPG when equipped with the standard manual transmission, as rated by the U.S. Environmental Protection Agency (EPA). When equipped with the optional automatic transmission, fuel economy increases to an EPA rated 26 city/38 highway/30 combined. For more information on fuel economy and how estimates are determined, visit www.fueleconomy.gov, a joint website venture between the U.S. Department of Energy’s Office of Energy Efficiency and Renewable Energy and the U.S. Environmental Protection Agency.

The mid-level i Touring trim ($24,495 MSRP) sits on larger 19-inch alloy wheels and, when equipped with a SKYACTIV-Drive transmission, includes all the features of the i Sport model equipped with an automatic transmission ($22,495 MSRP) as well as dual-zone automatic climate control with rear seat vents, leatherette-trimmed sport seats, a six-way power driver’s seat and a Commander Switch for operating functions on the 5.8-inch display.

SCBS is an added safety component designed to assist a driver in avoiding front collisions when traveling at low speeds of less than 19 miles per hour. When the imbedded laser sensor detects an obtrusive object and the system calculates there may be a high risk for collision, the brake pedal travel is reduced in order to hasten braking. Should the driver fail to perform an avoidance maneuver, the SCBS system will activate an automatic braking function. While the system will not eliminate accidents, its intent is to minimize them and reduce the severity of a crash. 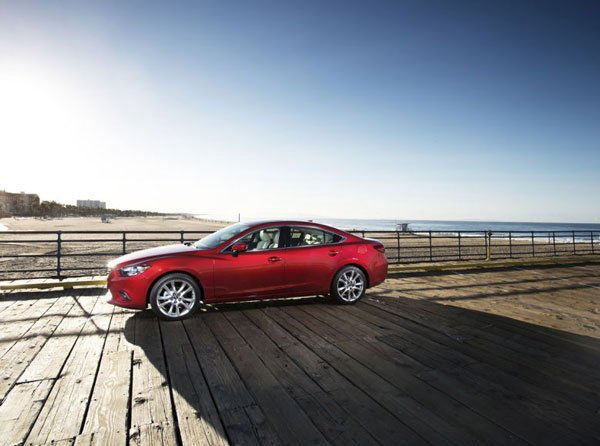 For an additional $900 MSRP, the MRCC/FOW Package adds Mazda Radar Cruise Control (MRCC) and Forward Obstruction Warning (FOW). The Advanced Package, available from the second half of 2013, adds the MRCC/FOW Package as well as a Lane Departure Warning System (LDWS), High Beam Control (HBC) and i-ELOOP, Mazda’s capacitor-based brake energy regeneration system, which is expected to offer increased fuel efficiency. Pricing for this package is not yet available.

A SKYACTIV-D 2.2-liter clean diesel engine will be offered on 2014 Mazda6 vehicles also during the second half of the year. Final specifications and packaging of the diesel engine and trim combinations will be announced closer to its on-sale date.

Mazda North American Operations is headquartered in Irvine, Calif., and oversees the sales, marketing, parts and customer service support of Mazda vehicles in the United States and Mexico through nearly 700 dealers. Operations in Mexico are managed by Mazda Motor de Mexico in Mexico City. For more information on Mazda vehicles, including photography and B-roll, please visit the online Mazda media center at www.mazdausamedia.com.

[2] SKYACTIV is a registered trademark of Mazda Motor Corporation (MC).