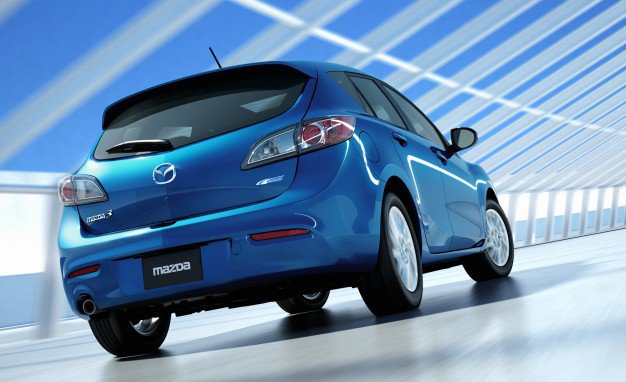 Mazda announced earlier this year that the 2012 3 would have stylistic updates and a significant addition to the engine lineup: the 155-hp, 2.0-liter Skyactiv direct-injection four-cylinder. As the photos here show, the aesthetic changes are minor, but the new engine is big news in terms of fuel efficiency. A four-door Mazda 3 i with the Skyactiv 2.0-liter—it’s available in the i Touring and i Grand Touring models—will deliver an EPA-certified 40 mpg on the highway, while a five-door i with the same engine just misses that mark at 39 mpg.

The adoption of the Skyactiv engine (the port-injected 2.0- and 2.5-liter engines carry over) has compelled Mazda to reshuffle its model and trim lineup for 2012, as outlined in the table below. (New additions are in blue.) 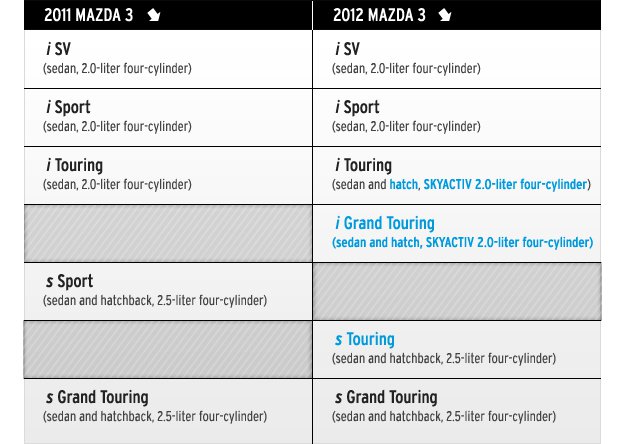 At $19,245 and $19,745, the i Touring sedan and hatch are the least-expensive models to get the new direct-injected Skyactiv four. The i Touring hatch is new this year; the sedan costs $350 more than last year. We asked Mazda if the increase could be pinned on the Skyactiv powertrain being more expensive to produce, but didn’t get a concrete answer. We were assured, however, that all previous features made the move to 2012.

An s Touring replaces last year’s s Sport, and adds the following as standard: leather on the steering wheel and shift knob, keyless entry and start, and a moonroof, among other stuff. It runs $22,095 for a sedan, or $500 more for five-door goodness. There’s now also an i Grand Touring model with the Skyactiv engine; GT goodies such as leather and navigation had been limited to s four- and five-doors. (A 2.5-liter four is still the exclusive engine for smodels.) This new trim starts at $23,095 for the sedan, with $500 extra required for the hatch. While we’re at it, the five-door-only Mazdaspeed 3 is $300 dearer this year, at $24,795.

So there you have it. We’re glad to see that prices didn’t change much, and offering the five-door with a smaller, more-efficient engine has been a long time coming. As to whether the Skyactiv four lives up to its efficiency claims, we’ll find out soon: We’ll have a test in the near future.