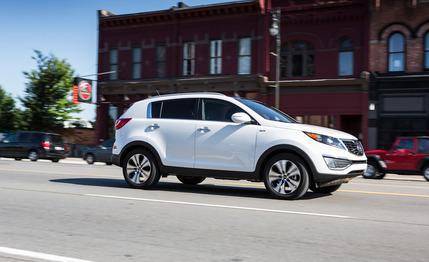 The fun-to-drive, spacious and fuel efficient Mazda CX-5 crossover is receiving a few midyear updates, which add more standard features and make the options list easier to understand. The CX-5 was the bestselling vehicle from Mazda last year, thanks to its agile handling, excellent fuel economy and sleek, modern KODO styling.

The base Sport model with front-wheel drive, SkyActiv-MT six-speed manual transmission and 155 hp 2.0-liter SkyActiv-G engine is still one of the best values in the segment, with a starting cost of under $22,000. It is also one of the few vehicles in its class with a sporty six-speed manual transmission available for those who like to shift for themselves.

Opt for the automatic transmission in the 2016 Mazda CX-5, and get the more powerful SkyActiv-G 2.5-liter engine and the Mazda Connect infotainment system with seven-inch color monitor and Commander control knob.

Every trim level is available with Mazda’s predictive i-Activ all-wheel drive system, which uses 27 sensors to read outside weather and temperature conditions up to 200 time per second to adjust torque distribution and maintain traction even in the worst weather conditions.

The EPA also recently named Mazda the most fuel-efficient mainstream auto manufacturer for the third consecutive year. Mazda obtained a fleet-wide adjusted fuel economy rating of 29.4 miles per gallon, and did so without offering any hybrid or electric vehicles.

SkyActiv technology will soon be included in every new Mazda vehicle, including the upcoming all-new Mazda CX-9 three-row crossover. The recently released CX-3 subcompact crossover offers fuel economy as high as 29 mpg city and 35 mpg highway, surpassing all other vehicles in its class.

If you are in the Los Angeles area and looking for a feature-packed and fuel efficient crossover, visit us today at Galpin Mazda and check out the 2016 Mazda CX-5.